Extra-Fine diamond (9 micron / 1200 mesh) to polish and refine a razor edge after sharpening with a coarser diamond stone. Roughly equivalent to a 1200-2000 or so grit waterstone, so this is a great workhorse stone for everyday sharpening and maintenance of a nice standard edge. This might be all you need, it doesn't sounds very fine with all the super high grit Japanese stones you'll see, but it's pretty fine and will put a nice edge on the average kitchen knife!

Diamond sharpening "stones" like this are an affordable, easy and fast way to sharpen your knives. And of course they never need flattening, so no need to invest in a lapping plate!

Note that DMT does NOT recommend this stone for lapping/flattening waterstone. Get one of the big DiaFlat lapping plates (extra-coarse or coarse) for that job, they will hold up MUCH better!

NOTE: Because they are so fine, the surface of these stones will appear scratched and there may be small indents/pits in the surface, but it's just a by-product of their manufacturing and does not affect performance. It's not as visible on the more coarse stones because of the big chunks of larger diamonds on the surface.

I recently started making wooden hand planes and the steel I have been using was reclaimed sawmill chipper blades (extremely hard) and some O1 oil hardening tool steel that I purchased. After trying multiple methods for ensuring I had a dead flat surface I expended a lot of energy and pretty much wore out my Norton 1000/4000 water stone. After researching diamond whetstones quite extensively it appeared as though the DMT stones were the best way to go. I purchased the Dia-sharp fine, extra fine and extra/extra fine stones for my needs thinking I could do the coarse work using emery cloth on my lapping plate and my water stone for the coarse grind on my primary bevel. I found the fine to cut quite agressively (compared to water stones) but this was somewhat expected. 20 strokes on the fine stone had a consistent scratch pattern across the back of the blade. Another 20 strokes on the extra fine created a lighter scratch pattern and another 20 strokes on the extra/extra fine left a very fine scratch pattern. I anticipated a little more polish with the extra/extra fine as it is listed as a 6000 grit. My 4000 grit waterstone will leave a more polished surface. However, the blade was sharp but not quite what I anticipated. A few passes on a strop though had the blade making fine strips from the edge of paper. In total I spent about 20 minutes in this process where a waterstone would have been over an hour and require me to flatten the stones a couple times. In the attached photo the blade sitting between the two plates had a bad trip on a power lapping plate which caused it to be ground more on one side. It only took 10 to 20 strokes on each stone to get a consistent scratch pattern at the business end. 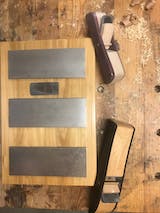 The 1200 Grit DMT stone is the perfect companion to the Fine DMT stone. Really sets the edge up for Stroping.
Also, fantastic service and Shipping from Paul's Finest as usual.

Sign up to our occasional Newsletter for special discounts, sales, and new product announcements!